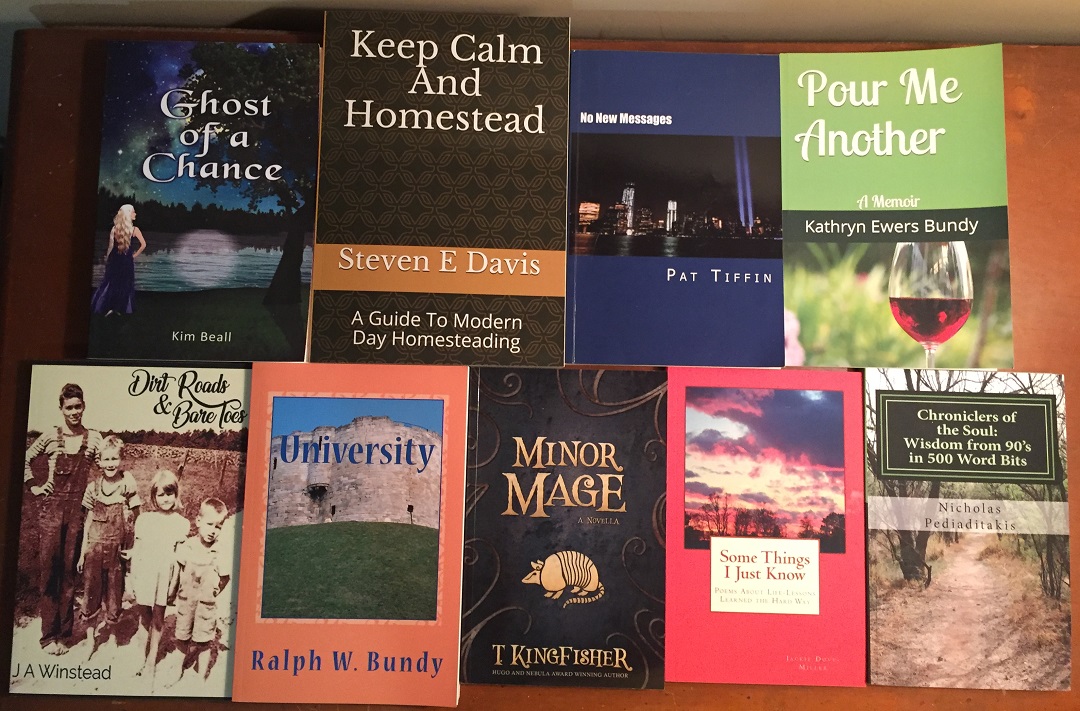 Wow, it has been a while since I’ve posted a book review here. Be assured, I review the books I read (and audiobooks I listen to), on Amazon and Goodreads. Since this writing site / blog is less than a year old, I have not yet adopted the habit of posting my reviews here, too. I’ll work on that.

In the meantime… Today I’d like to share my reviews of a book series by a North Carolina author. (I read mostly NC authors’ books, to support them and #ReadLocal for the good of the community… like supporting a small business.)

The series author is Kim Beall (pronounced like “bell”). There are four books in the series, all taking place in a fictional “Woodley, USA” town setting. The [chronological] order in which they should be read:

What this series provides is an ongoing sage of main character (MC) Cally as she delves deep into the human and not-quite-human characters living in her adopted home in Woodley. Over time, her understanding of where the roads turn — from Woodley into another plane where non-humans reign — grows alongside her connections to the town residents.

This series appealed to my interest in the paranormal, with an interesting collection of supernatural beings, and colorfully-described otherworldly settings. But that’s not all reading the series provides. Each book draws you in to Cally’s daily life, newcomer angst, snippy or unique humans, the history of the town, and the connections between the ordinary and extraordinary. All of this is blended with a bit of romance — and a side of dry humor that had me laughing out loud.

Here are my brief reviews for each book.

Seven Turns: I couldn’t put it down: received it and finished it in the same day. Fantastically descriptive prose creates a mental picture of the unique town where main character, Cally, finds herself. There’s more than meets the eye with the town’s residents, who cagily or cluelessly reside alongside denizens of another realm. I couldn’t put the book down until I knew what was going to happen to Cally and who these characters were. Were they friends or foes? Now I know who’s who! I enjoyed the mix of otherworldly elements, ghosts, the mysteries, plus the positive relationships depicted between [some] characters.

Moonlight and Moss: Characters you’ll root for, and the continuing story of beautiful, magical Woodley. I received the book on a Friday and two days later I’d finished the whole 287 pages and the cool extras at the end including a suggested playlist. This portion of the tale covers MC Cally’s adventures as a murderer roams free, a friend is arrested on the word of an unlikeable ghost hunter, and Cally deals with her forbidden-but-blooming romance … all while handling the ghosts who haunt her “home” and the return of an obnoxious man she knew back in high school.

A Midnight Clear: A holiday themed addition to the series, this part of the tale is centered around Christmas in Woodley, entwining the small town holiday/family happenings with the paranormal (ish) ways of the town’s not-quite-human inhabitants — and neighbors. This put me in the mood for the holidays, as the characters decorated, talked of Santa, and dealt with a dead body in the picturesque, icy pond! There’s a bit of time travel, too, in a way.

Ghost of a Chance: The cool conclusion to this saga… There’s so much going on in Woodley, USA in this installment. Cally has to deal with many crazy goings-on in the town… and its alter. Things get a little darker as the cast of characters reach the final stretch, and determine what the future will hold.